Hostas in a Pot

It is a rare gardener in this part of North Carolina that doesn’t plant hostas, and I am definitely not one of those rare ones. In fact, one might just call me a hosta junkie. Witness the several dozen hostas that I have throughout my garden, with over a dozen cultivars.

With so many different shades and leaf forms, they fill many roles. I have never been overly concerned about their flowering, although my friend Maryann Roper gave me several white flowering hostas (name unknown) that have a marvelous fragrance. As with most hosta lovers, it is the foliage that grabs our attention.

One of the ways I use hostas in my garden is to plant them in  pots. That allows me to optimise soil and sun/shade conditions; all I really have to do is to remember to provide adequate water, very important in this current period of super high temperatures and minimum rainfall. Several of my pots are hooked into my irrigation system which helps, but it can’t cover all of them. Hostas in pots are certainly protected from voles, are less likely to endure slug damage, but are still subject to deer browsing. I have not had problems with rabbits eating pot plants. 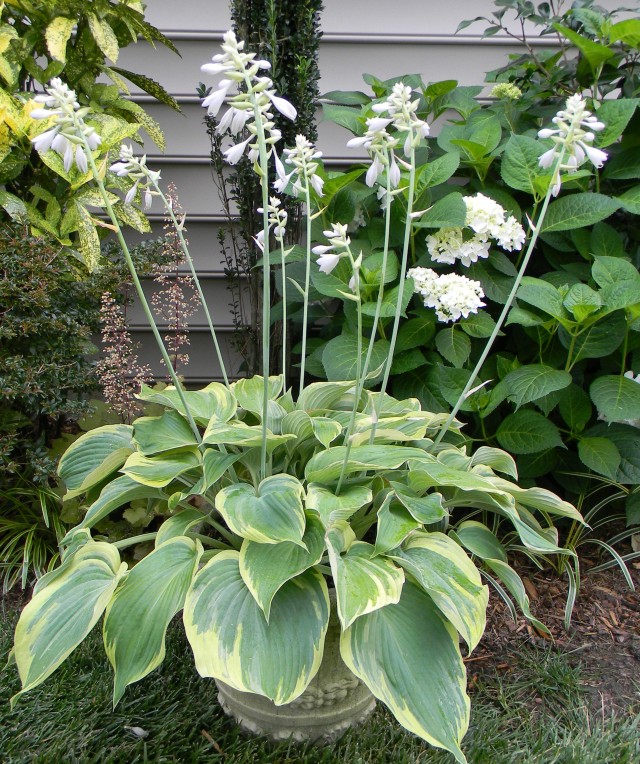 This hosta has lived in this pot through at least four winters, with no special protection. It will soon need to be divided (and shared) and repotted. Here are a few potted hostas placed about my garden: 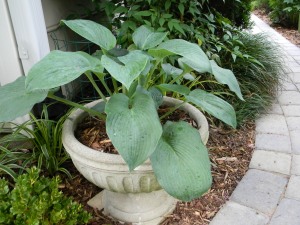 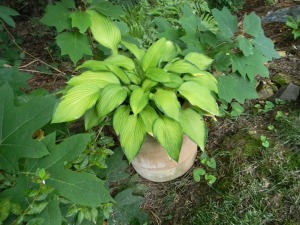 I apologize for the lack of identifications; a computer crash left me without my plant list. (I know; I should have put labels around, but I just never got to it.) I thought I would never forget the names of these plants I like so well, but, alas, time takes its toll. The pots themselves add a bit of color in spots. I can place them under trees without having to worry about root competition. All of these survived this past winter which was one of the coldest for our region “in recent memory.”

In a similar effort, several heucheras have also found their way into pots which only adds to my gardening flexibility.

John Viccellio retired after 24 years in the U. S. Navy and began to dig into gardening when he could finally land in one place. He completed the Master Gardener course in 1992 and has since designed and constructed two of his own gardens. He wrote a monthly garden column for ten years and was a regular contributor to Carolina Gardener magazine. John published his first book, Guess What's in My Garden!, in 2014. He lives in Stallings, NC with his wife, in close proximity to six of his eight grandchildren.
View all posts by johnvic8 →
This entry was posted in Gardening and tagged deer, heuchera, hosta, hosta lovers, Maryann Roper, North Carolina, pots, rabbits, voles. Bookmark the permalink.

1 Response to Hostas in a Pot