In a Vase on Monday: Blooms from Today

Our garden continues to bring forth a delight of blooms as we move from one season to another. The vitex have just about finished, but the crape myrtles are taking over. I’m still waiting for ‘Tuscarora’ to open, and will share its lovely blossoms with you when they show.

Today my wife helped me fill a pitcher with flowers for today’s offering. The pitcher, some may recognize, was previously the home of an unfortunate Carolina wren family that lost its young earlier this year to an unidentified critter. But it’s back in service now. 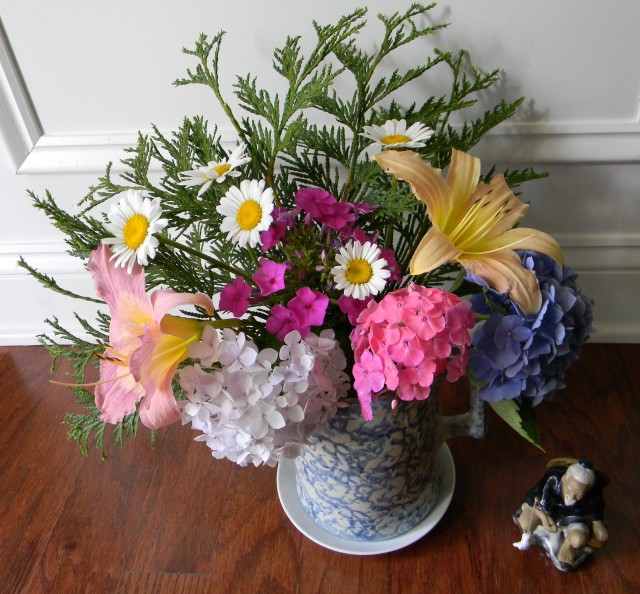 The fisherman is a small artifact we found in Japan and my wife thought it might fit the summer mood of the arrangement. 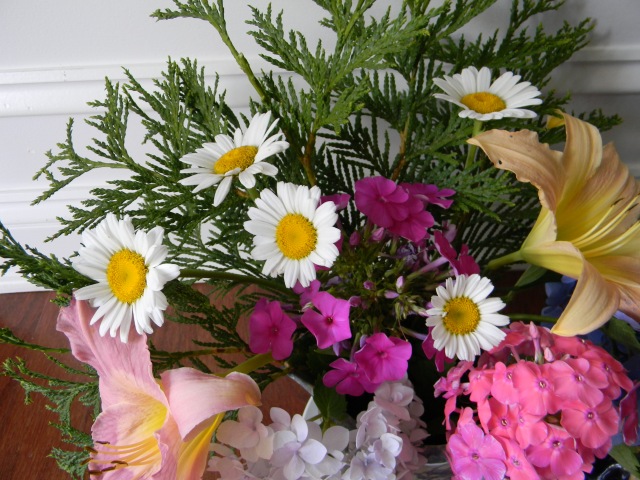 I apologize for the several unidentified plants in the arrangement. They have made too many moves over the years. Where is the keeper of lost labels?

You may want to click on In a Vase on Monday to visit the delightful postings of Cathy, the originator of this meme.

John Viccellio retired after 24 years in the U. S. Navy and began to dig into gardening when he could finally land in one place. He completed the Master Gardener course in 1992 and has since designed and constructed two of his own gardens. He wrote a monthly garden column for ten years and was a regular contributor to Carolina Gardener magazine. John published his first book, Guess What's in My Garden!, in 2014. He lives in Stallings, NC with his wife, in close proximity to six of his eight grandchildren.
View all posts by johnvic8 →
This entry was posted in Gardening, In a Vase on Monday and tagged arborvitae, Becky, Becky Shasta daisy, Blushing Bride, Blushing Bride hydrangea, Carolina wren, crape myrtle, Daquiri, daylily, Flame Lilac, hydrangea macrophylla, Leucanthemum x superbum, phlox paniculata, Queen Dorothy, Shasta daisy, Thuja Green Giant, Tuscarora, vitex. Bookmark the permalink.

1 Response to In a Vase on Monday: Blooms from Today