“My arranger” has brought out all of her Ikebana training to help me put together flowers and foliage from our garden for this week’s offering for In a Vase on Monday. 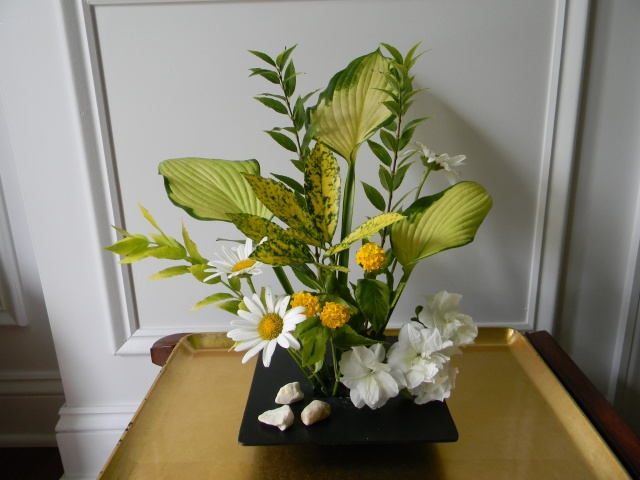 The gold of the lantana echoes the center of the Becky daisies. The three white stones provide balance.

Let me recommend that you click on In a Vase on Monday to visit the delightful postings of Cathy, the originator of this meme. I do hope she will not be disappointed by this offering.

John Viccellio retired after 24 years in the U. S. Navy and began to dig into gardening when he could finally land in one place. He completed the Master Gardener course in 1992 and has since designed and constructed two of his own gardens. He wrote a monthly garden column for ten years and was a regular contributor to Carolina Gardener magazine. John published his first book, Guess What's in My Garden!, in 2014. He lives in Stallings, NC with his wife, in close proximity to six of his eight grandchildren.
View all posts by johnvic8 →
This entry was posted in Gardening, In a Vase on Monday and tagged 'Chardonnay Pearls', aucuba, Aucuba japonica, Aucuba japonica 'Mr. Goldstrike', Autumn Moonlight, Becky daisy, Deutzia gracilis, Deutzia gracilis Chardonnay Pearls, Encore azalea, flower arranging, hosta, Ikebana, In a Vase on Monday, Japanese Kenzan flower arranger, lantana, Leucanthemum x superbum. Bookmark the permalink.