The Woods in Early November

The woods at the back of our property have changed dramatically over the past week. Could the first frost a week ago have provided the impetus that the leaves apparently needed to change? The colors are certainly not unexpected, but nonetheless it is refreshing to be reminded that they are so beautiful to behold. 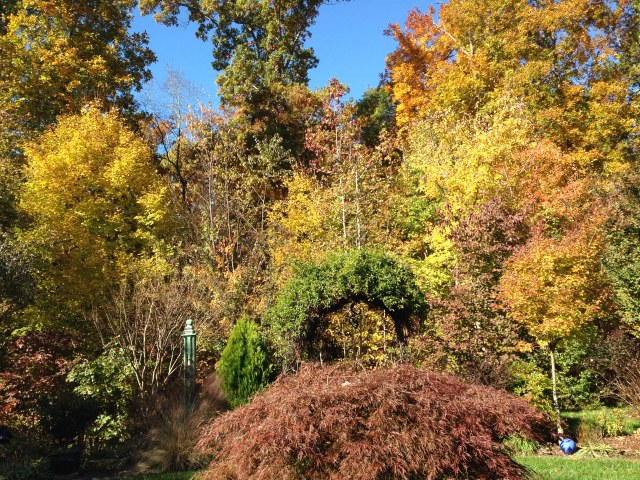 The predominate color here is yellow, with tinges of orange. There are, however, much darker leaves to add contrast, as with this dogwood. 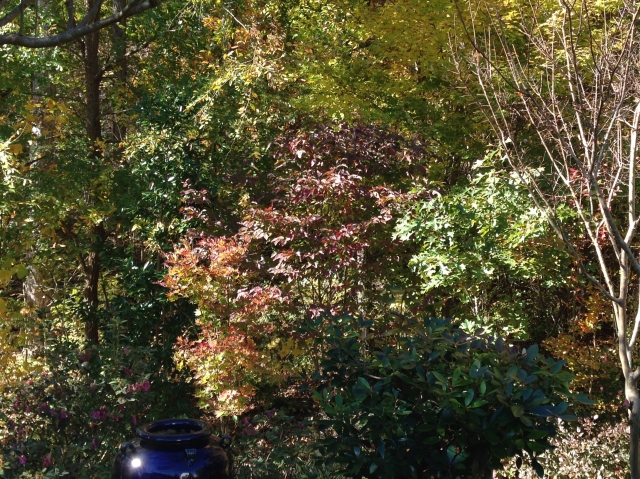 And the Japanese maple in the center of the garden: 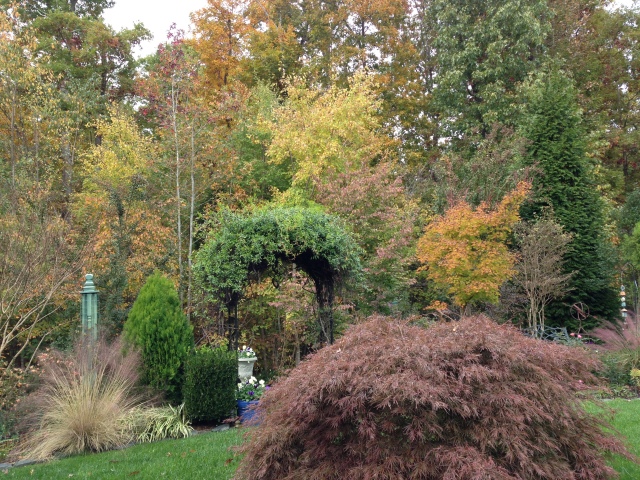 The contrast with the remaining green…the arborvitae, the boxwood, the jessamine, the turf…is also striking.

A few plants remain in bloom, despite the frost, but sparingly. Flowers on a rose, the muhly grass, an occasional phlox and azalea are still colorful, but most have vanished to let the woods take center stage.

Some of the crape myrtles’ leaves have changed, but most are still green. At left are the last remains of color on a ‘Catawba’ crape myrtle; on the right is the foliage on the Kousa dogwood which is taking on a lovely shade of lavender.

Foliage of oak leaf hydrangea and an unidentified maple:

The brilliant foliage of Acer ‘Summer Glow” which changes from gold to red in the fall:

I have started the November chores of trimming, removing the dead parts to the compost pile, and thinking (so far, just thinking) about the leaves that are beginning to cover the garden. Daffodil bulbs arrived in the mail yesterday, so I need to pick a good day to get them in the ground.

Without the woods, this might be a season when the spirits of this gardener begin to sink with the temperature. But the color of the woods right now is so exhilarating, that one can only smile.

And when the thermometer and these beautiful leaves drop and leave a largely bare woods, we still have the pansies and violas

John Viccellio retired after 24 years in the U. S. Navy and began to dig into gardening when he could finally land in one place. He completed the Master Gardener course in 1992 and has since designed and constructed two of his own gardens. He wrote a monthly garden column for ten years and was a regular contributor to Carolina Gardener magazine. John published his first book, Guess What's in My Garden!, in 2014. He lives in Stallings, NC with his wife, in close proximity to six of his eight grandchildren.
View all posts by johnvic8 →
This entry was posted in Gardening, Nature and tagged Acer, Acer Summer Glow, arborvitae, autumn color, autumn leaves, boxwood, Catawba crape myrtle, daffodil, dogwood, Japanese maple, jessamine, Kousa dogwood, maple, oak leaf hydrangea, pansy, viola, woods. Bookmark the permalink.

6 Responses to The Woods in Early November