In a Vase on Monday: Scene two

The flowers in my garden that are candidates for In a Vase on Monday are becoming fewer and fewer as we move into mid November. Today’s offering will, of necessity, include several blooms that have appeared in recent postings. Nonetheless, I am pleased to present the following arrangement as scene two with color from our early November garden.

I placed this in the dining room on top of a Korean chest in front of a Japanese 18th century woodblock. I tried to take the photograph head on to include the entire triptych. but reflections on the glass of the window behind me made the pictures unusable. For a second look, I moved it to the kitchen and placed it under cabinet lighting for a brighter look.

The arrangement centers on the pink of  Camellia sasanqua  ‘Our Linda,” and Encore azalaeas ‘Autumn Debutante.’ Supporting characters are played by Spirea bumalda ‘Goldmound,’ Hosta ‘St. Elmo’s Fire,’ and Tassel fern (Polystichum polyblepharum). They are held in a ginger jar from my Arranger’s collection of blue and white artifacts. 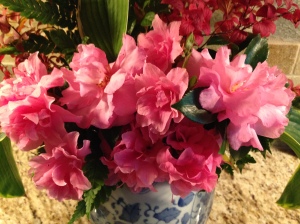 Much of the foliage of the ‘Goldmound’ spirea shrubbery is changing color in the garden and taking on a striking fall shade of red. 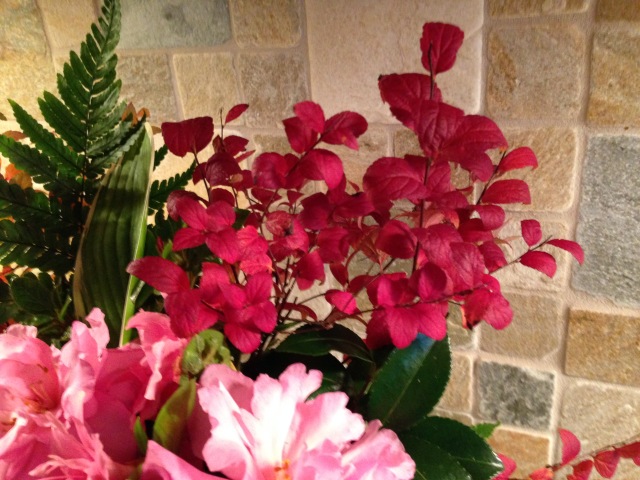 The little lamb in the background has a message for all gardeners (and friends of gardeners):

Please visit In a Vase on Monday to see the delightful postings of Cathy, the originator of this meme, at Rambling in the Garden.

John Viccellio retired after 24 years in the U. S. Navy and began to dig into gardening when he could finally land in one place. He completed the Master Gardener course in 1992 and has since designed and constructed two of his own gardens. He wrote a monthly garden column for ten years and was a regular contributor to Carolina Gardener magazine. John published his first book, Guess What's in My Garden!, in 2014. He lives in Stallings, NC with his wife, in close proximity to six of his eight grandchildren.
View all posts by johnvic8 →
This entry was posted in Gardening, In a Vase on Monday and tagged Autumn Debutante, blue and white pottery, Camellia 'Our Linda', Camellia sasanqua, Cathy, Encore azalea, Hosta 'St. Elmo's Fire', In a Vase on Monday, Japanese woodblock print, Korean chest, Polystichum polyblepharum, Spirea bumalda 'Goldmound', Tassel fern, triptych, Vase. Bookmark the permalink.

5 Responses to In a Vase on Monday: Scene two