In the year 2014 the critters were certainly here in my garden: four legged ones, winged ones, creepy crawling ones, invisible ones, and persistent ones. But this was a relatively benign year in comparison to some previous years. Probably the most obvious change was the drop in deer predation. I know they visited my garden because I saw their droppings, and the roses suffered. Surprisingly, the hostas and heucheras were largely spared. Weeks went by without the local herd stopping by. I frequently saw five or six of them idling across the softball field just down the street, so I am grateful they didn’t detour into my garden. There are folks just down the street who are not so grateful. 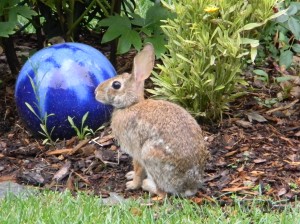 Rabbits were a constant presence in the garden (and continue to this day), but again their damage was limited compared to previous years. Their favorite meal seems to be liriope. Fortunately, liriope can take it. For many years they found a rabbit delicacy in the new shoots of coneflowers and daylilies, but I learned how to fool them. I put short wire cages around the young plants until they grow up. By the time I can take the cages away, the rabbits apparently find something more to their taste (more liriope).

A raccoon played havoc with the suet feeder in May. In the middle of the night it ripped the feeder off the tree, wrenched open the cage (something even I have difficulty accomplishing at times), and gobbled down its contents. After several days of refilling the feeder and then finding it ravished and on the ground the next morning, I removed it for several weeks. The mockingbirds and woodpeckers came, looked, and left. They must have been very unhappy. The raccoon, thankfully, moved on; there were no problems since then, the feeder was replaced (securely), and the birds are happy again.

The most unusual events during the year were two occasions when hawks landed in the garden. I see and hear them frequently soaring around my space and even occasionally alighting high in one of the nearby trees. I often see the remains of feathers that were their prey, but I have never seen them here at ground level. A small one landed on the patio; my Arranger called, and I got there just in time to see it disappear, before I could identify it. The second event involved a larger hawk, probably a red shouldered hawk, resting in the vitex. It was magnificent. Again, at the call of my Arranger, I ran to get the camera; by the time I got set up trying to focus on the hawk through the blinds, it flew away. I got no pictures, so you will have to trust my word.

My four feeders and two bird baths were continually busy with cardinals, robins, bluebirds, finches, titmice, wrens, chickadees, mockingbirds, hummingbirds, and several kinds of woodpeckers. What the birds dropped, the squirrels and mourning doves were quick to clean up. We had lots of babies; fledgling season was a pleasure to behold. I have been a bit disappointed that a wider variety of birds did not frequent our garden this year. Blackbirds and cow birds dropped by on their way to and fro and were a nuisance for a while.

A number of butterflies made the garden more beautiful with their presence. I think I must make a concerted effort to learn to identify butterflies and moths. I will also have to learn how to photograph them. I do know what that green and gold creeping critter is that devoured the parsley and then became a beautiful Monarch. I think this is an Eastern Tiger Swallowtail on the phlox, but I will certainly accept an overcall. 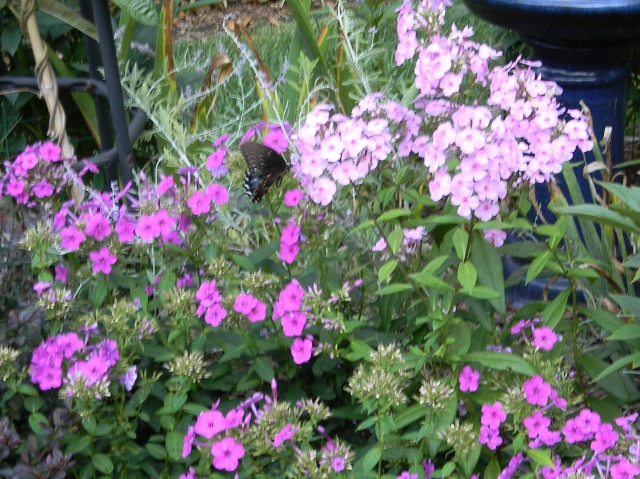 Several kinds of bees frequent the garden. Favorites for bumblebees are the vitex and annual lantana. There must be a bumblebee nest somewhere on the edge of the garden. Everytime I walked through that area, a bumblebee appeared. It wasn’t hostile; I kept my distance; it was just patrolling.

White flies were washed off the gardenias with the hose. The same procedure worked on other predatory insects. I did learn that I have to be more intentional about protecting the azaleas; they suffered a lot of foliage damage. But even the Japanese beetles did less than usual. Of course, they went after the Knock Out roses, but they did their damage just when they were finishing their first flush of blooms, so it turned out to be a good time to cut them back anyway. By the time they were ready to bloom again, the Japanese beetles were gone.

A few other interesting critters that I see regularly: a green anole and a box turtle: 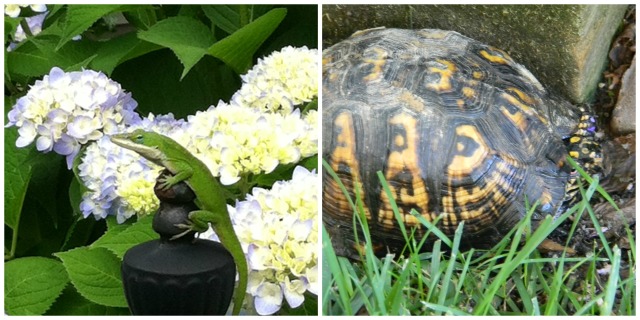 I don’t know if this is friend or foe (I pray it is friendly): 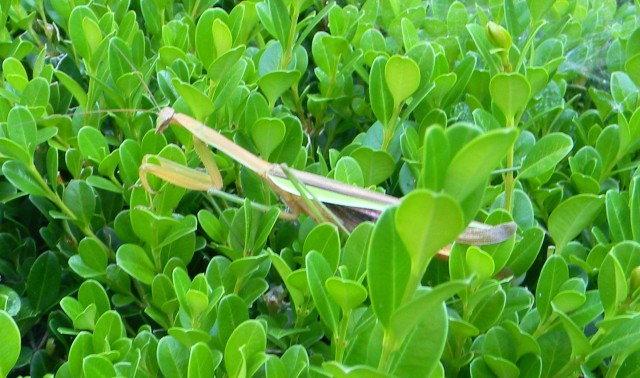 The heart stopping critter event of the year took place in June. I walked into our screened porch and spied a small but quite poisonous copperhead snake lounging on the back of a wicker chair. It was time to be brave. I carefully moved the chair outside, snake and all, and took care of it. My Arranger and I couldn’t discover where that venomous little critter might have found entrance to the porch. We accused each other of leaving the door open.

I didn’t get a picture, and I lost the argument as well.

John Viccellio retired after 24 years in the U. S. Navy and began to dig into gardening when he could finally land in one place. He completed the Master Gardener course in 1992 and has since designed and constructed two of his own gardens. He wrote a monthly garden column for ten years and was a regular contributor to Carolina Gardener magazine. John published his first book, Guess What's in My Garden!, in 2014. He lives in Stallings, NC with his wife, in close proximity to six of his eight grandchildren.
View all posts by johnvic8 →
This entry was posted in Gardening and tagged bird bath, bird feeder, box turtle, bumblebee, butterfly, coneflower, copperhead, daylily, Easter Tiger Swallowtail, garden birds, green anole, hawk, Japanese beetle, liriope, Monarch, praying mantis, rabbit, raccoon, suet feeder, wildlife. deer. Bookmark the permalink.