In a Vase on Monday Meets Garden Bloggers Foliage Day

Today is Monday, the 22nd of December, and I find myself in a blogger’s conundrum. Cathy at Rambling in the Garden has invited me to participate each week in  In a Vase on Monday, and Christina at Garden of the Hesperides has invited me to participate each month on the 22nd in Garden Bloggers Foliage Day. What is a concerned and wanting-to-be-polite blogger supposed to do when everything happens at once? I am convinced that the better part of valor is to be attentive to both of these kind invitations, and thus I am hereby offering a hybrid post. I hope the ladies will be smiling.

In a Vase on Monday

My winter garden continues to leave me very sparse offerings for this week’s vase. However, I did locate some bright red nandina berries that the birds had not yet devoured to serve as the focus of a simple arrangement. They certainly add a festive note to the season.

The greenery is foliage from the tea olive (Osmanthus frangrans). I was delighted (and surprised) to discover that it had a few tiny white flowers in bloom. Pieris japonica ‘Red Mill’ bud clusters are included for a touch of contrast. 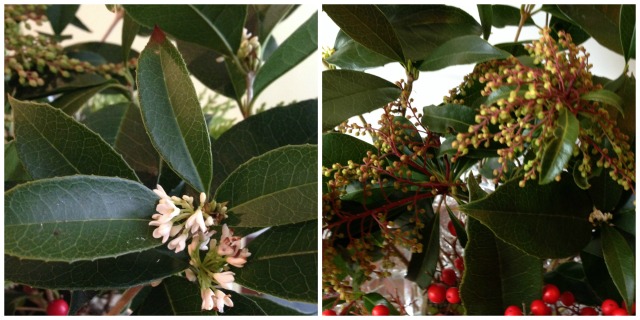 Moved to another location the arrangement complements other holiday items: 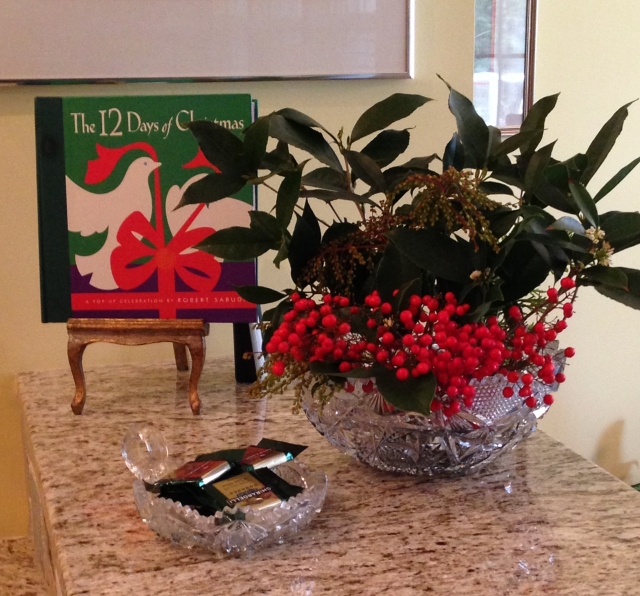 The cut glass bowl, knife rest and candy dish have been in my Arranger’s family for a number of generations. Candy anyone?

Today is cold and gray and a light mist is still coming down, but it wasn’t bad enough that I couldn’t squish around the soppy, spongy garden for a GBFD review. In truth, I was a bit surprised to find as much variety of foliage as I did on such a bleary, dreary day. Here are Carolina jessamin Gelsimium sempervirens on the arbor, a ‘Peach Crisp’ heuchera on the porch, and ‘Mr. Goldstrike’ Aucuba japonica. 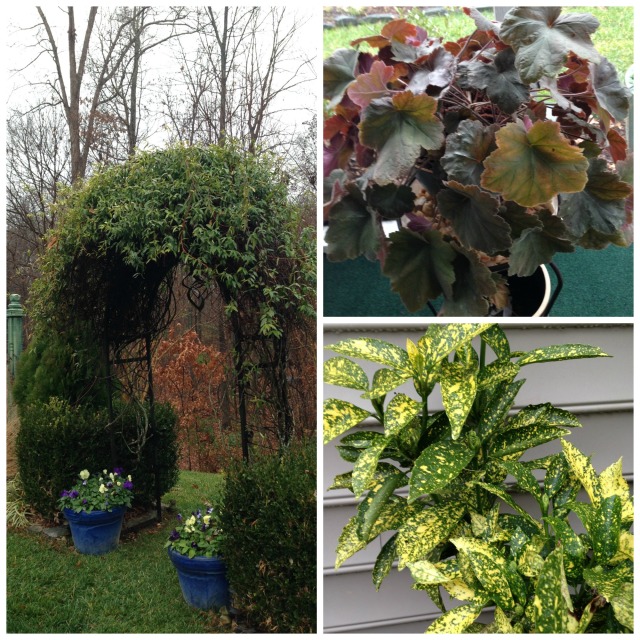 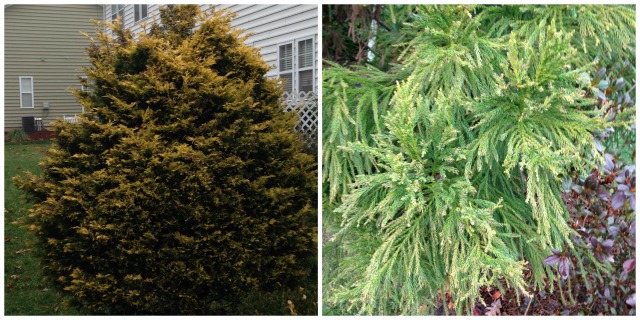 Loropetalum chinense ‘Rubra’ often blooms in mid-winter, so it is no surprise but still a pleasure to find its striking color on a dreary day. On the right, ‘Governor Mouton’ Camellia japonica is full of buds, just beginning to show a bit of the color that will soon be opening. Also on the right is Cleyera Japonica Ternstroemia gymnanthera. Below are Liriope muscari variegata, the dark purple winter foliage of Azalea ‘Sunglow,’ and muhly grass, weighed down by the rain.

Thanks to Cathy and Christina for these invitations. Do visit their postings at In a Vase on Monday and  Garden of the Hesperides

John Viccellio retired after 24 years in the U. S. Navy and began to dig into gardening when he could finally land in one place. He completed the Master Gardener course in 1992 and has since designed and constructed two of his own gardens. He wrote a monthly garden column for ten years and was a regular contributor to Carolina Gardener magazine. John published his first book, Guess What's in My Garden!, in 2014. He lives in Stallings, NC with his wife, in close proximity to six of his eight grandchildren.
View all posts by johnvic8 →
This entry was posted in GBFD, In a Vase on Monday, Uncategorized and tagged aucuba, Aucuba japonica 'Mr. Goldstrike', Azalea Sunglow, Camellia japonica Governor Mouton, Carolina jessamin, Cathy, Christina, Cryptomeria japonica Yoshino, Cupressocyparis leylandi 'Golconda', cut glass bowl, garden, Garden of the Hesperides, GBFD, Gelsimium sempervirens, In a Vase on Monday, Loropetalum chinense, muhly grass, nandina berries, Nandina domestica, Osmanthus fragrans, Peach Crisp heuchera, Pieris japonica, Pieris japonica Red Mill, Rubra, tea olive, winter garden. Bookmark the permalink.