My Arranger and I attended the annual Spring Home and Garden Show in Charlotte the last weekend in February. It was the ninth year for us, and we recognize a certain pattern…a pattern that organizers use each year. By now we know where to go to see the orchid lady and the herbs and new fangled garden tools and crafted pots. And we know where to taste the dipping sauces and watch cooking demonstrations. We also know where to avoid the hot tub salesman and the deck construction guys. I did want to stop by the kitchen knife booth, but my Arranger persuaded me that we needed to check out the succulents instead.

I will report on the many garden displays in future posts, but for now I would like to share one of my favorites. I have dabbled in bonsai over the years and look forward each year to see the displays offered by Charlotte area bonsai experts. 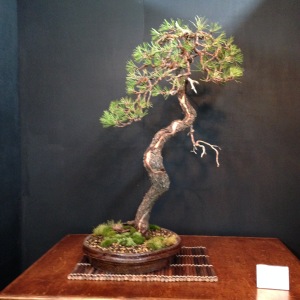 I well appreciate the art and skill…and patience…that goes into the creation and maintenance over the years of these beautiful specimens. Seeing them is truly an inspiration.

John Viccellio retired after 24 years in the U. S. Navy and began to dig into gardening when he could finally land in one place. He completed the Master Gardener course in 1992 and has since designed and constructed two of his own gardens. He wrote a monthly garden column for ten years and was a regular contributor to Carolina Gardener magazine. John published his first book, Guess What's in My Garden!, in 2014. He lives in Stallings, NC with his wife, in close proximity to six of his eight grandchildren.
View all posts by johnvic8 →
This entry was posted in Uncategorized and tagged bonsai, Home and Garden Show. Bookmark the permalink.