In a Vase on Monday: Sunglow

Azaleas are taking over prime spots in our garden, and, despite a week of rain (the level in my rain gauge is almost at four inches for the week), the azaleas have not been beaten down and are holding up well. One of the brightest of the lot is ‘Sunglow,’ almost fully open, so why not give it star treatment in this weeks vase. 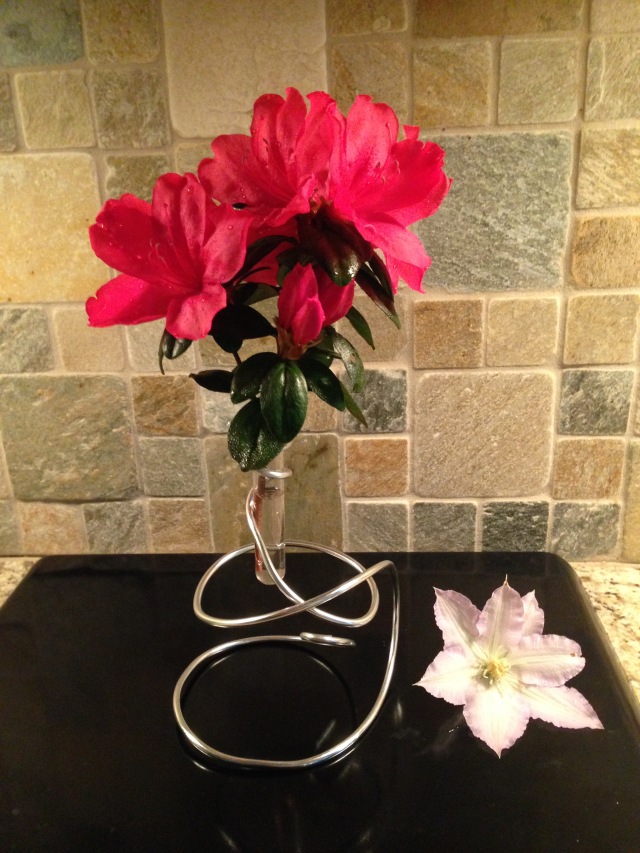 This vase was a gift from Meredith Stroud, whose marvelous and beautiful garden was on the Charlotte Garden Club’s annual spring tour this past weekend. My Arranger and I had the privilege of acting as “gate keepers” for the visitors to her garden, and she very graciously presented us with this vase as a token of thanks. Meredith crafted the vase of aluminum wire; it is indeed a unique…and treasured…work of art.

The clematis accent is a single blossom of ‘Henryi,’ at least that what was written on the label, but I have been confused by the light lavender edging on the blossom. ‘Henryi’ that I have grown in another garden was pure white. I think I may have a mis-identification.

Let me suggest that you visit Cathy at Rambling in the Garden, the host of the weekly meme “In a Vase on Monday” in which she invites others to share what is growing in their gardens. See what she and others are putting in their vases this week.

John Viccellio retired after 24 years in the U. S. Navy and began to dig into gardening when he could finally land in one place. He completed the Master Gardener course in 1992 and has since designed and constructed two of his own gardens. He wrote a monthly garden column for ten years and was a regular contributor to Carolina Gardener magazine. John published his first book, Guess What's in My Garden!, in 2014. He lives in Stallings, NC with his wife, in close proximity to six of his eight grandchildren.
View all posts by johnvic8 →
This entry was posted in Gardening, In a Vase on Monday and tagged Azalea Sunglow, Charlotte Garden Club, garden tour, hand-crafted vase, Meredith Stroud. Bookmark the permalink.

16 Responses to In a Vase on Monday: Sunglow