Today is Garden Bloggers’ Foliage Day, sponsored by Christina at Creating my own garden of the Hesperides. My garden is in a stage of transition right now; the peonies and iris have finished for the spring, and I’m waiting for the blooms of the chaste tree (Vitex agnus-castus), phlox, hibiscus, hydrangeas,and coneflowers. So it turns out to be a great time to focus on foliage.

This is the third season for the purple leaved hisbiscus ‘Midnight Marvel.’ It should begin to flower in two or three weeks and continue for several months. My single oak leaf hydrangea is just beginning to open at the edge of the woods, and the ‘Wine and Roses’ weigela has finished flowering but I expect it to retain  its purple blush throughout the summer. 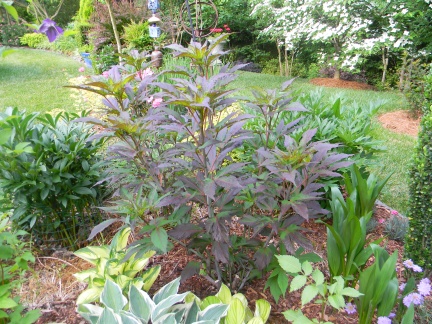 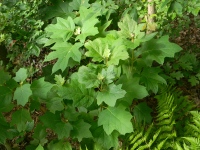 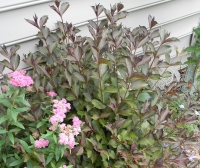 Berckmann’s arborvitae (Thuja occidentalis ‘Berckmanii’) is one of my favorite shrubs/small trees. Its bright lime green, almost gold foliage contrasts well with other greens in the garden, and it holds its attractive oval shape as it grows. 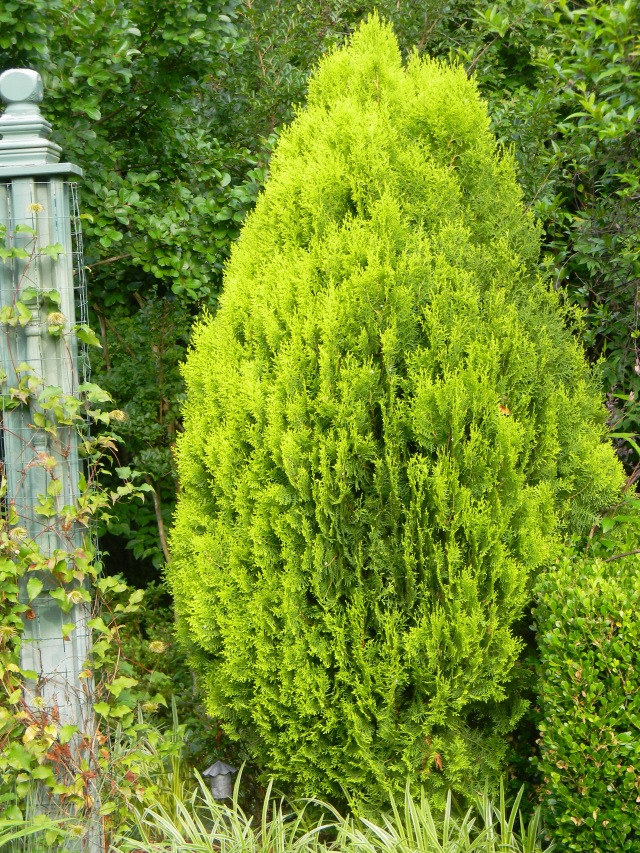 The foundation planting on the “shady” side of the house is also going through a transition. The Aucuba japonica ‘Mr. Goldstrike,’ Camellia japonica ‘Governor Mouton,’ and the Encore azalea ‘Autumn Lily’ have completed their spring bloom cycles, while the dwarf crape myrtle, Heuchera villosa ‘Caramel,’ hosta, and ‘Endless Summer’ hydrangea will be starting soon. 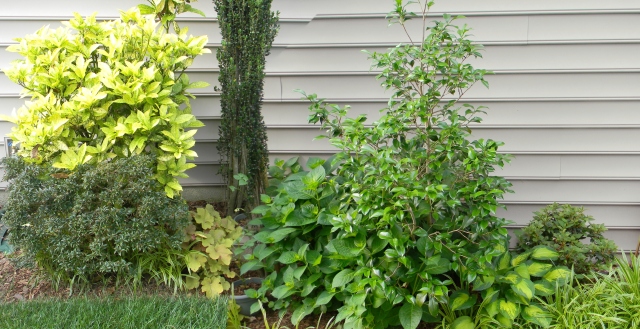 ‘Summer Glow’ maple continues to hold its golden color and stand out against the darker green of the woods. All my hostas are completely leafed out and many are showing signs of bloom scapes. 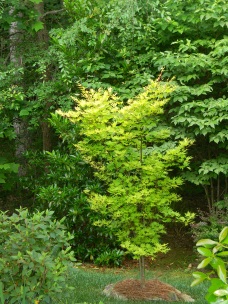 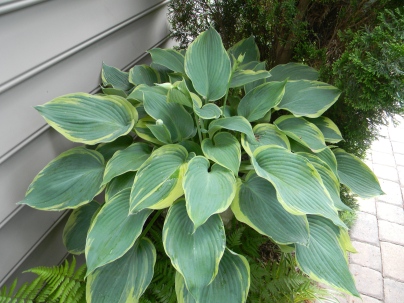 I have several clumps of Autumn ferns (Dryopteris erythorosora) growing in the woods. They got there as rejects from pots on the front porch and have thrived and spread in their new habitat. I have started dividing them and moving them around the garden in the company of hostas. 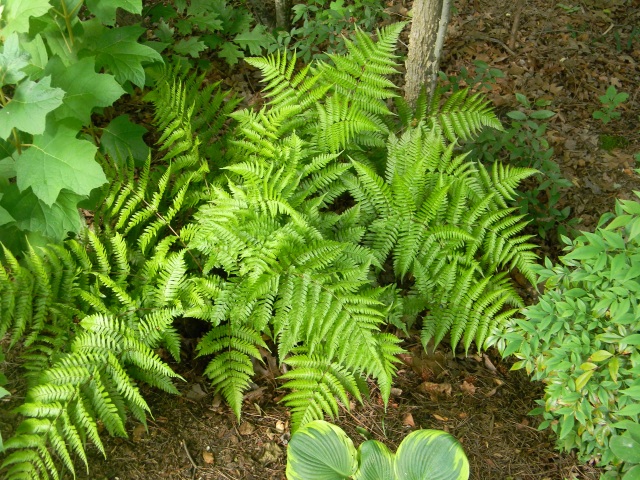 The foundation planting at the back corner of the house is a combination of plants selected primarily for their foliage: various hostas, an unidentified arborvitae, English boxwood, variegated liriope, Autumn fern, and carex. Hostas, liriope, deutzia and Heuchera dolce ‘Beaujolais’ add the color throughout the garden.

The corner of the house 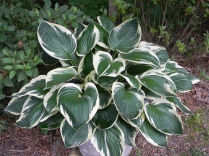 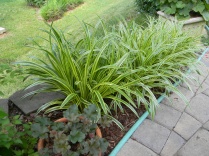 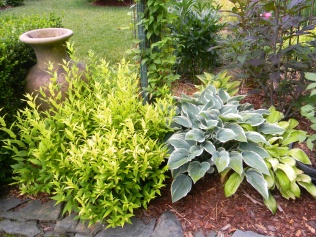 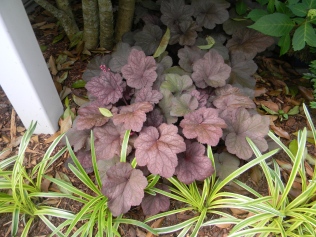 Juniperus horizontalis ‘Mother Lode’ is a low growing ground cover which makes a vivid contrast with turf. The Japanese maple in the front yard was an “oprhan” in need of rescue (without a label) some years ago, but it has clearly found a good home. 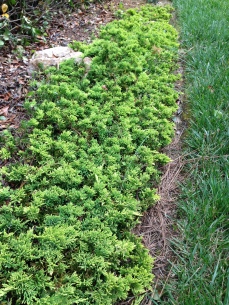 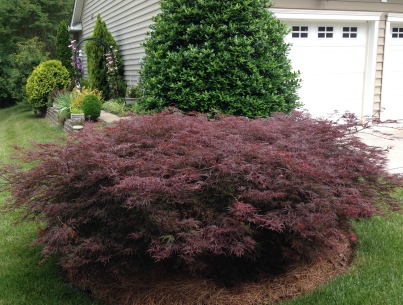 John Viccellio retired after 24 years in the U. S. Navy and began to dig into gardening when he could finally land in one place. He completed the Master Gardener course in 1992 and has since designed and constructed two of his own gardens. He wrote a monthly garden column for ten years and was a regular contributor to Carolina Gardener magazine. John published his first book, Guess What's in My Garden!, in 2014. He lives in Stallings, NC with his wife, in close proximity to six of his eight grandchildren.
View all posts by johnvic8 →
This entry was posted in Gardening, GBFD and tagged 'Endless Summer' hydrangea, Aucuba japonica 'Mr. Goldstrike', Autumn fern, Berckmann's arborvitae, Camellia japonica Governor Mouton, Deutzia gracilis Chardonnay Pearls, dwarf crape myrtle, Encore azalea 'Autumn Lily', foundation planting, heuchera Caramel, Heuchera dolce Beaujolais, Hibiscus Midnight Marvel, hosta Patriot, hostas, Japanese maple, Juniperus horizontalis 'Mother Lode.', oak leaf hydrangea, Summer Glow maple, Variegated liriope, Weigela florida Wine and Roses. Bookmark the permalink.