A week ago I noticed that I had a few uninvited guests on my pot of parsley. They looked an awful lot like the various larval stages of Black Swallowtail butterflies (Papilio polyxenes), which are known to have a mighty taste for parsley. They come every August, invited or not. 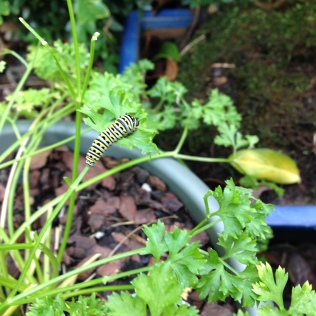 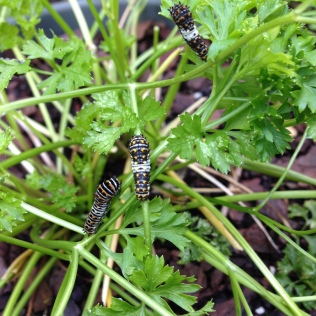 Here we are a week later. Where has the parsley gone? Where have the cute little caterpillars gone? I’ve looked for chrysalis, but so far I’ve not found any.

I guess I should wait awhile before planting another batch of parsley…at least until I begin to see Black Swallowtails flitting about.

John Viccellio retired after 24 years in the U. S. Navy and began to dig into gardening when he could finally land in one place. He completed the Master Gardener course in 1992 and has since designed and constructed two of his own gardens. He wrote a monthly garden column for ten years and was a regular contributor to Carolina Gardener magazine. John published his first book, Guess What's in My Garden!, in 2014. He lives in Stallings, NC with his wife, in close proximity to six of his eight grandchildren.
View all posts by johnvic8 →
This entry was posted in Nature and tagged Black Swallowtail butterflies, herbs, Papilio polyxenes, parsley, Swallowtail butterflies. Bookmark the permalink.