In a Vase on Monday: Back Again

After an absence of several weeks I am glad to be back to In a Vase on Monday, hosted by Cathy at Rambling in the Garden. Recently we have had harsh hot weather and now a lot of rain; I love the rain, but I do wish it were spaced out a bit more evenly.

Nonetheless, there is still a lot of color in my garden, rather surprising for August. The crape myrtles have stayed in bloom much longer than in previous years, the phlox is coming back from recent pruning, and ‘Little Lime’ hydrangea is blooming its heads off and is featured in this week’s vase.

The players in this light drama are ‘Purple Magic’ dwarf crape myrtle, ‘Little Lime’ hydrangea, and seed heads from vitex in the background. The vitex blooms are done, but I have deadheaded as much as I can reach, and new growth is already sprouting. With good weather, I should have another show of blooms before frost. 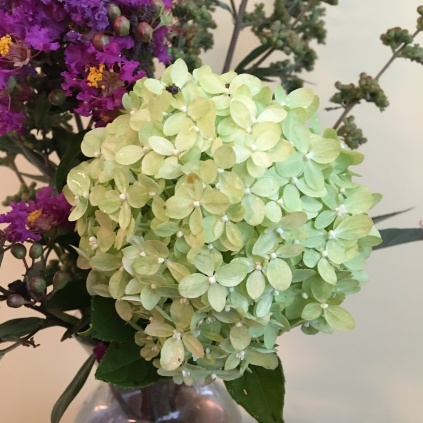 Please visit Cathy at Rambling in the Garden to see what she and others have taken from their gardens this week to share with us.

John Viccellio retired after 24 years in the U. S. Navy and began to dig into gardening when he could finally land in one place. He completed the Master Gardener course in 1992 and has since designed and constructed two of his own gardens. He wrote a monthly garden column for ten years and was a regular contributor to Carolina Gardener magazine. John published his first book, Guess What's in My Garden!, in 2014. He lives in Stallings, NC with his wife, in close proximity to six of his eight grandchildren.
View all posts by johnvic8 →
This entry was posted in Gardening, In a Vase on Monday and tagged Little Lime hydrangea, Purple Magic Crape myrtle, Rambling in the Garden, Vitex agnus-castus. Bookmark the permalink.

29 Responses to In a Vase on Monday: Back Again