In a Vase on Monday: The Governor

We have a gray day this morning, but still there is an opportunity to share something growing in our garden In a Vase on Monday. 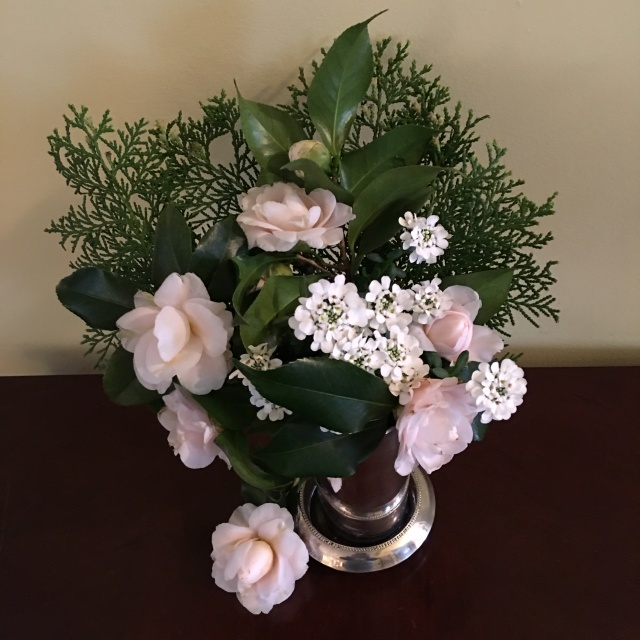 Camellia japonica ‘Governor Mouton’ is overflowing with blossoms in the garden now, but most of them were damaged by frost. A few, seemingly protected in the interior of the plant, have made their way into our vase, accented with the indestructible candy tuft. My Arranger added some greenery from Berckmann’s arborvitae.

Pop over to Cathy at Rambling in the Garden to see what she and others are sharing from their gardens this week.

John Viccellio retired after 24 years in the U. S. Navy and began to dig into gardening when he could finally land in one place. He completed the Master Gardener course in 1992 and has since designed and constructed two of his own gardens. He wrote a monthly garden column for ten years and was a regular contributor to Carolina Gardener magazine. John published his first book, Guess What's in My Garden!, in 2014. He lives in Stallings, NC with his wife, in close proximity to six of his eight grandchildren.
View all posts by johnvic8 →
This entry was posted in Gardening, In a Vase on Monday and tagged Berckmann's arborvitae, Camellia japonica Governor Mouton, Iberis sempervirens Candytuft. Bookmark the permalink.

27 Responses to In a Vase on Monday: The Governor