In a Vase on Monday: Survivors

Last week for In a Vase on Monday I shared a vase of reblooming bearded iris buds that I saved from a forecast frost. Several readers encouraged me in trying to “force” the iris inside. I am happy to share this modest but blooming vase of bearded iris ‘Clarence’ which made it through the week. The ‘Sunny Disposition’ showed a tiny speck of yellow for a day or so but faded before opening and was removed. 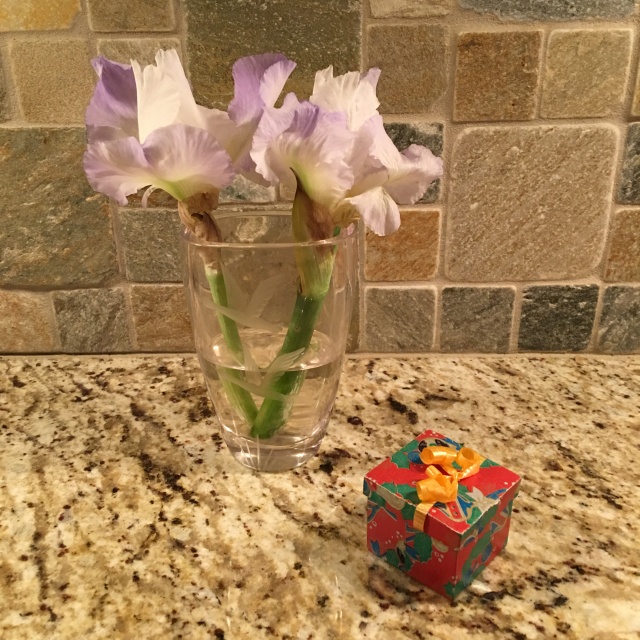 It’s fun when an experiment brings a positive result. Please visit Cathy, the originator of IAVOM, at Rambling in the Garden to see her vase and that of others who join with her each week.

John Viccellio retired after 24 years in the U. S. Navy and began to dig into gardening when he could finally land in one place. He completed the Master Gardener course in 1992 and has since designed and constructed two of his own gardens. He wrote a monthly garden column for ten years and was a regular contributor to Carolina Gardener magazine. John published his first book, Guess What's in My Garden!, in 2014. He lives in Stallings, NC with his wife, in close proximity to six of his eight grandchildren.
View all posts by johnvic8 →
This entry was posted in Gardening, In a Vase on Monday and tagged Bearded iris Clarence, bearded iris Sunny Disposition, Rambling in the Garden. Bookmark the permalink.

17 Responses to In a Vase on Monday: Survivors