Yesterday I came upon stark evidence that a heinous crime had been committed. 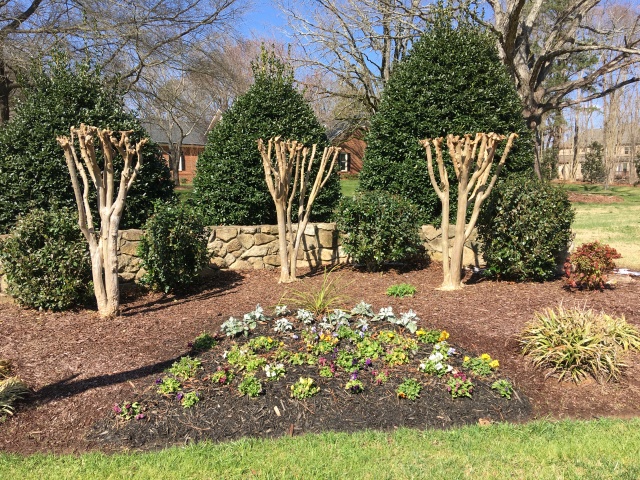 This is unquestionably a case of first degree Crape Murder. A dastardly deed. In plain view 0f the public. Brazen. Condoned by the “Landscape Committee.” Why they probably paid so-called outside “professionals” to do the dirty deed.

I am barely able to consider the pain and suffering these three sturdy examples of treehood had to endure. And closer examination of the evidence strongly suggests that this wasn’t the first time they had been treated to such harsh treatment.

What’s next? Surely they won’t have those handsome evergreens cut down into basketballs.

John Viccellio retired after 24 years in the U. S. Navy and began to dig into gardening when he could finally land in one place. He completed the Master Gardener course in 1992 and has since designed and constructed two of his own gardens. He wrote a monthly garden column for ten years and was a regular contributor to Carolina Gardener magazine. John published his first book, Guess What's in My Garden!, in 2014. He lives in Stallings, NC with his wife, in close proximity to six of his eight grandchildren.
View all posts by johnvic8 →
This entry was posted in Gardening, Things I See Around Town and tagged crape myrtle. Bookmark the permalink.

7 Responses to Things I See Around Town: Criminal Activity?