A Friday Walk in the Woods

One of the main attractions that encouraged us to select the location on which to build our house was the presence of a wooded area at the back of the lot. It is a permanent “green space,” so our view is protected from encroachment. A small stream runs through it, although without rain it is frequently dry. It is lined with moss which brightens the spirit when it brightens itself with a rain and new spring growth.

You can imagine our delight when this view of our woods presented itself that first fall, eight years ago. 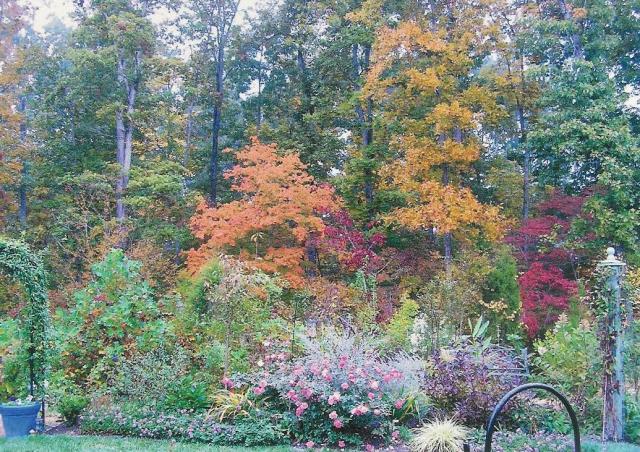 Our garden drops off dramatically to the woods, and we had no intention of developing the woods because of the steep access. I did, however, want a place for compost and a brush pile for use by our local critters. I realized I would have to do a bit of tidying (a natural instinct) to be able to move through the woods. Much of the next year was spent cleaning out dead trees and limbs. A tangle of vines…Virginia creeper, wild grape, and honeysuckle…was choking much of the other vegetation and had to be cleared. I was excited to see raspberries in the woods (but didn’t care much for the thorns) and looked forward to fresh berries with my morning repast. The birds, however, ate them all and left me nothing but thorny seedlings appearing throughout the garden.

The woods, however, became my plant “hospital.” When something wasn’t doing well  in the garden, I often moved it down into the woods to give it a second chance. Many plants thrived there, often with benign neglect on my part. The woods are in the flood plain adjacent to the stream; the soil is rich and drains well. Some plants proved to be too big for the space I gave them in the garden; they too went into the hospital. As most gardeners can probably guess, as a lot of plants made their way to the hospital in the woods, I began gradually to get ideas about giving the edge of the woods a bit more organization and polish. Over the years it has come to its present state, giving us another bed to enjoy (and a bit more to maintain).

Two Korean boxwood had been in pots at our front door in Chapel Hill. We moved them to our new home and expected them to continue their welcoming role. They lagged drastically and we decided to replace them. They were the first plants to go in the hospital; I cleared a space, dug them in, and left them alone (except for an occasional hand watering). Today I realized they are thriving and have at least tripled in size.

As I walked through the woods today, I noticed the Becky daisies are continuing to bloom. Encore azaleas along the edge are beginning to put out a new blush of color. Two variegated aucuba (Aucuba japonica ‘Crotonifolia’) were languishing where I had planted them, so I moved them to the hospital. Now they are doing well; even in deep shade their variegation lights up the woods. The loropetalum and purple barberry that were too big for their space in the garden are now key players along the edge of the woods and provide interesting contrast to the green. The Virginia sweetspire is beginning to turn, and the ‘Debutante’ Camellia japonica is loaded with buds for next spring. The smoke tree (Cotinus coggygria) has retained its dark color and is the anchor of the border.

Walking in the back of the woods, I spied a clump of Autumn ferns (Dryopteris erythrosora) growing in the compost pile. I had pitched them when it appeared they hadn’t made it through last winter. I will move them this fall to a new location in the hospital. Autumn ferns are tough plants. This will be the fifth Autumn fern I’ve discarded which has now formed a colony in the woods. There’s probably a lesson there: patience.

When I cleared the woods years back, I discovered a number of our native wildflower “Strawberry Bushes” (Euonymous americanus) growing throughout the woods. They are tough plants, have done well (now without the vines), and multiplied. I love their more common name, “Hearts-a-bustin’,” an apt description of their seed pods when they turn red and then open. They are starting to do that just now. 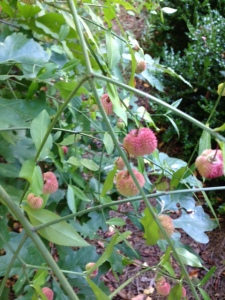 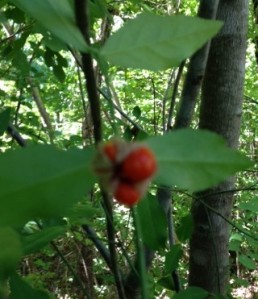 My eye was attracted by some colorful objects on the branches of one of the oaks. I’ve not been able to identify this particular oak…there are several of them in the woods. Could this be an acorn in the making? My tree field guide couldn’t help answer the question. Multiple examples of this object were seen, of different sizes and colors. I will keep an eye on this phenomenon to see how it develops.

I enjoy “discovering” things in the woods, and a stroll on Friday with an intentional purpose can lead to interesting findings. It also gives me a chance to check up on an area I don’t routinely visit every day. I’ve learned that a trip to the hospital can be quite beneficial to a struggling plant. Several of them have made their way back to the main attraction.

8 Responses to A Friday Walk in the Woods