A Visit to a Daylily Garden

Today my Rector, my wife and I visited the Billinda Daylily Garden in the Charlotte suburbs. The garden developed by Bill and Linda Gluck is an official American Hemerocallis Society display garden, in which there are over 650 daylily cultivars on display in smartly laid out beds, with well placed labels for each daylily clump. 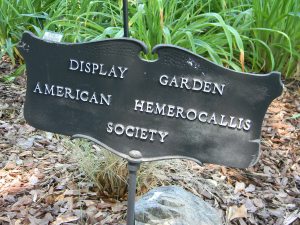 This was at least my tenth visit to their annual  Open House, and I look forward each year to see the number and beauty of the daylilies they have included in their collection. Bill is an active hybridizer and has received numerous awards for his named hybrids, many of which are displayed in the garden and were for sale. Included in the garden are a “collection of all the Stout Medal award winners, all the Ida Munson award winning doubles, and a complete collection of the Stamile Candies.  There are three garden sections designated to 103 doubles, a special area for spiders, and a miniature garden of 36 cultivars, plus 12 other display gardens.” 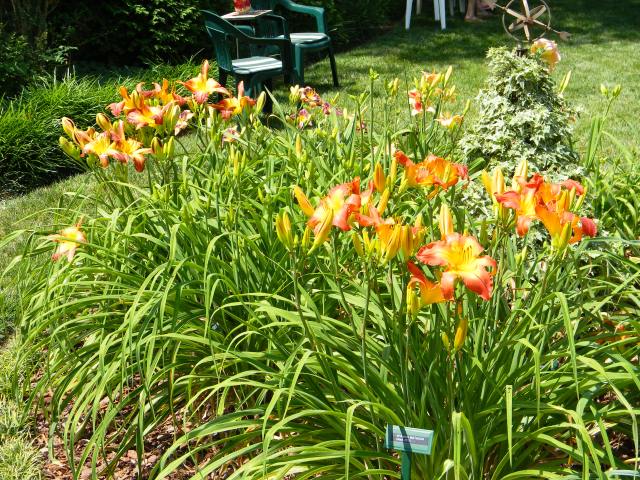 One could easily fill up a garden with so many of these beauties, and my resistance to temptation when it comes to beautiful things (grandbabies, great jazz recordings, and flowers among others) could indeed be stronger. But my wife was with me; she suggested a bit of restraint (and also the winning point: Where are you going to plant them?”). Unprepared to answer that last question, I left the garden empty handed. My friend the Rector Gardener left with seven beauties to plant. Perhaps I can persuade him to divide and share in a few years.

Following is a sampler of just a few of the daylilies that caught my eye.

‘Carol Todd’ and ‘All American Chief’ 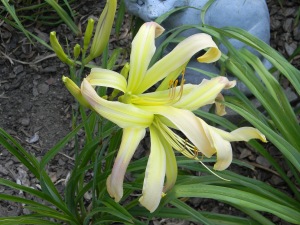 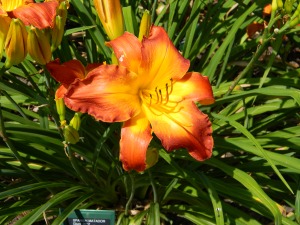 ‘No Strings Attached’ and ‘Spanish Matador’

And these do not even include the doubles section of the garden. Next year I will still take my wife with me to the Open House, but this time I will be prepared with a note of specific spots in my garden that need some ‘Red Hot Wings.’

John Viccellio retired after 24 years in the U. S. Navy and began to dig into gardening when he could finally land in one place. He completed the Master Gardener course in 1992 and has since designed and constructed two of his own gardens. He wrote a monthly garden column for ten years and was a regular contributor to Carolina Gardener magazine. John published his first book, Guess What's in My Garden!, in 2014. He lives in Stallings, NC with his wife, in close proximity to six of his eight grandchildren.
View all posts by johnvic8 →
This entry was posted in Gardening and tagged All American Chief, American Hemerocallis Society, American Hemerocallis Society display garden, Becky Lynn, Bill and Linda Gluck, Billinda Daylily Garden, Carol Todd, Charlotte, daylily, daylily cultivar, daylily cultivars, Daylily Garden, display garden, display gardens, double daylilies, hybridization, hybrids, Ida Munson award, Jeanne Fitton, Linda Gluck, Night Wings, No Strings Attached, Red Hot Wings, Spanish Matador, Stamile Candies, Stout Medal Award. Bookmark the permalink.

2 Responses to A Visit to a Daylily Garden